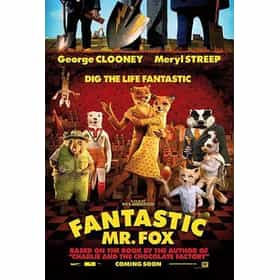 Fantastic Mr. Fox is a 2009 American stop-motion animated comedy film based on the Roald Dahl children's novel of the same name. The film is about a fox who takes food each night from three mean and wealthy farmers. They are fed up with Mr. Fox's capers and try to take him out, so they dig their way into the fox's home, but the animals are able to outwit the farmers and live underground. Produced by Indian Paintbrush and Regency Enterprises, and released in the autumn of 2009, the film features the voices of George Clooney, Meryl Streep, Jason Schwartzman, Bill Murray, Willem Dafoe, Michael Gambon, and Owen Wilson. For director Wes Anderson, it was his first animated film. ... more on Wikipedia

Fantastic Mr. Fox is ranked on...