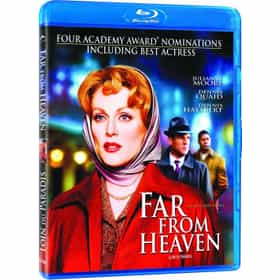 Far from Heaven is a 2002 American drama film written and directed by Todd Haynes and starring Julianne Moore, Dennis Quaid, Dennis Haysbert, and Patricia Clarkson. The film tells the story of Cathy Whitaker, a 1950s housewife, living in wealthy suburban Connecticut as she sees her seemingly perfect life begin to fall apart. It is done in the style of a Douglas Sirk film, dealing with complex contemporary issues such as race, gender roles, sexual orientation and class. ... more on Wikipedia

Far from Heaven is ranked on...

Far from Heaven is also found on...