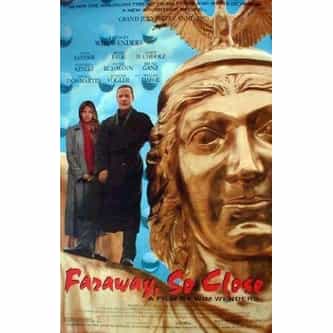 Faraway, So Close! is a 1993 film by German director Wim Wenders. The screenplay is by Wenders, Richard Reitinger and Ulrich Zieger. The film is a sequel to Wenders' 1987 film Wings of Desire. Actors Otto Sander and Bruno Ganz reprise their roles as angels visiting earth. The film also stars Nastassja Kinski, Willem Dafoe and Heinz Rühmann. It won the Grand Prix du Jury and was nominated for the Palme d'Or at the 1993 Cannes Film Festival. ... more on Wikipedia

Faraway, So Close! IS LISTED ON