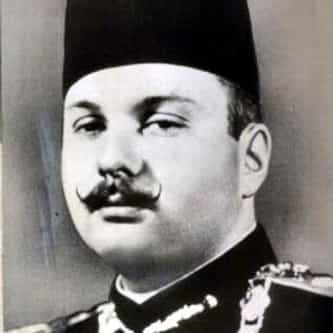 Farouk I (; Arabic: فاروق الأول‎ Fārūq al-Awwal; 11 February 1920 – 18 March 1965) was the tenth ruler of Egypt from the Muhammad Ali dynasty and the penultimate King of Egypt and the Sudan, succeeding his father, Fuad I, in 1936.His full title was "His Majesty Farouk I, by the grace of God, King of Egypt and the Sudan, Sovereign of Nubia, of Kordofan and of Darfur". He was overthrown in the 1952 military coup d'état and forced to abdicate in favour of his infant son, ... more on Wikipedia

Farouk of Egypt IS LISTED ON

#5 of 11
375 VOTES 11 Brazen Swindlers From History Who Were Full Of Surprises
#11 of 14
7.2k VOTES Who Was The Most Self-Indulgent Royal In History?
#8 of 13
4.8k VOTES The Weirdest Things Historical Royals Have Collected
#17 of 20
4.4k VOTES 20 Rare Pictures Of Historical Royals Like We've Never Seen Them Before
Famous People From Egypt Famous People Born in 1920 Members of the Muhammad Ali Dynasty Famous People Who Died in Italy