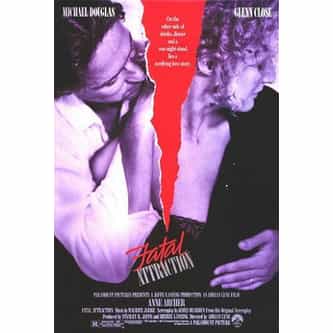 This film is a 1987 American psychological thriller film directed by Adrian Lyne and starring Michael Douglas, Glenn Close, and Anne Archer. The film centers on a married Manhattan man who has a weekend affair with a woman who refuses to allow it to end, resulting in emotional obsession on her part. The film was adapted by James Dearden and Nicholas Meyer from an earlier 1980 short film by Dearden for British television, Diversion. ... more on Wikipedia

Fatal Attraction IS LISTED ON