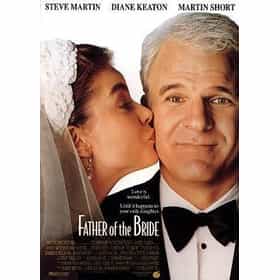 Father of the Bride is a 1991 American comedy film starring Steve Martin, Diane Keaton, Kimberly Williams, George Newbern, Martin Short, B.D. Wong and Kieran Culkin. It is a remake of the 1950 film of the same name. The film inspired a series of Hallmark commercials that featured the smiling faces of the happy couple and sneak-peeks at the backs of numerous greeting cards. This film is number 92 on Bravo's "100 Funniest Movies". Martin portrays George Banks, a businessman and owner of an athletic shoe company, who, when he finds out his daughter is getting married, does not want to give her away. He eventually learns to live with his new son-in-law and realizes that as long ... more on Wikipedia

Father of the Bride is ranked on...

Father of the Bride is also found on...