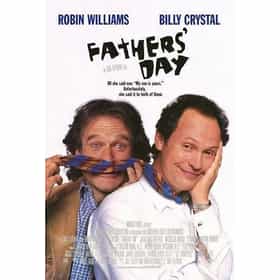 Fathers' Day is a 1997 comedy film directed by Ivan Reitman and starring Robin Williams, Billy Crystal, Julia Louis-Dreyfus, and Nastassja Kinski. It is a remake of the 1983 French film Les Compères. In the film, Collette Andrews enlists two former lovers, cynical lawyer Jack Lawrence and lonely, ex-hippie, suicidal writer Dale Putley to help her search for her runaway teenage son Scott by telling each man that he is the father. When Jack and Dale run into each other and find out what's happening, they work together to find Scott and determine the identity of the actual father. The film features an appearance by the musical group Sugar Ray, and Mel Gibson makes a brief ... more on Wikipedia

Fathers' Day is ranked on...

Fathers' Day is also found on...