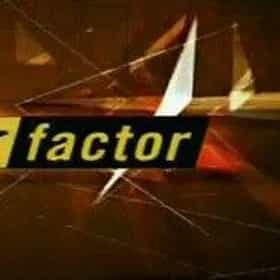 Fear Factor is an American stunt/dare reality game show. It originally aired between 2001 and 2006, when it was cancelled. It was later revived in 2011, only to be cancelled again on May 13, 2012. After its second cancellation, a two-part special aired in July 2012. The original Dutch version was called Now or Neverland. When Endemol USA and NBC adapted it to the American market in 2001, they changed the name to Fear Factor. The show pits contestants against each other in a variety of stunts for a grand prize, usually of US $50,000. From Seasons One to Five, the contestants were generally three men and three women, all competing for themselves, but in Season Six, the show moved to a ... more on Wikipedia

Fear Factor is ranked on...

#764 of 1,176 The Greatest TV Shows Of All Time 1.4M VOTES Choosing the best TV shows of all time means taking into account the best TV dramas, the best TV comedies, the best cartoons...
#35 of 62 The Best MTV Original Shows 31.1k VOTES The best MTV original shows include reality shows, music series, comedies, and dramas, as well as animated series. MTV start...
#260 of 391 People who voted for Fear Factor... also upvote Toy Story Franchise on The Best Movies of All Time also upvote Forrest Gump on The Best Movies of All Time The Best TV Shows of The Last 20 Years 1.5M VOTES This best TV show list represents the combined opinions of thousands of TV fans. Anyone can vote on this list of the best TV...
#98 of 137 The Dumbest Reality Shows of All Time 94.1k VOTES Reality shows are stupid. No one's really denying it at this point. Yet they continue to prove massively popular - if arguab...
#3 of 253 People who voted for Fear Factor... People Age 30 to 49 are 2x more likely to vote for this The Best Reality TV Shows Ever 167.1k VOTES This is a list of the best reality TV shows on television, the most (often shamefully) addictive reality TV series. From g...
#14 of 74 The Best Shows You Watched After School in the 2000s 10.6k VOTES The 2000s was a decade of great technological achievements. During this time, we left behind the simpler comforts of the '90...
#30 of 74 The Greatest Game Shows of All Time 34.3k VOTES What are the greatest game shows of all time? If there's one staple of American television, it's the game show. Over the dec...
#5 of 130 The Best Reality Competition Series 73.7k VOTES The best reality TV competition series, ranked by fans and critics. Reality shows are among the most-watched programs on TV,...
#15 of 21 The Reality Shows You Would Most Want to Win 6k VOTES You can't turn on the TV these days without accidentally running into an epic reality competition show. From dancing and sin...
#7 of 31 What to Watch If You Love 'Survivor' 177 VOTES Survivor is one of the first reality competition shows to work in the United States, and its success is evidenced ...
#3 of 14 Bizarre Game Shows That Were Actually on the Air at One Point 635 VOTES Among decades-long classics like Jeopardy and Wheel Of Fortune lie several game shows with stranger rule books. These w...
#30 of 30 What to Watch If You Love 'America's Got Talent' 85 VOTES America's Got Talent kept viewers on the edge of their seats with the real-life excitement of people achieving their dreams,...
#21 of 30 What to Watch If You Love 'Hell's Kitchen' 44 VOTES Hell's Kitchen kept viewers on the edge of their seats with career-making competitions for aspiring chefs, so it's no surpri...
#73 of 476 The Best Television Shows of the 2000s 143.5k VOTES Some great TV shows came out of the 2000s, while some have even lived on. Here's a list of the best shows that aired from 20...
#7 of 22 The Best Current MTV Shows 16.2k VOTES Wondering what to watch on MTV? This list of the best MTV shows on now in 2019 has you covered. Once primarily known for bro...
#35 of 146 The Best 2010s NBC Shows 4k VOTES These are the best 2010s NBC shows ranked by user votes. The 2010s was a great time for NBC television programs. Some of the...
#11 of 31 The Best Game Shows of the 2000s 6.1k VOTES If you’re a fan of both television and board games, chances are you're also a big fan of televised game shows. Most of the...
#6 of 25 The Best Obstacle Course Competition Series Ever 374 VOTES Would you have what it takes to make it through a treacherous obstacle course? There are plenty of obstacle course reality s...
#4 of 49 The Most Exciting Reality Competition Shows Ever Made 300 VOTES The best reality competition TV shows ever aired are some of the most exciting and competitive series to watch on telev...
#1 of 27 The Best US Versions of International Game Shows 158 VOTES While the game show as a genre has its roots in the United States history of broadcast TV, that doesn't mean the format hasn...