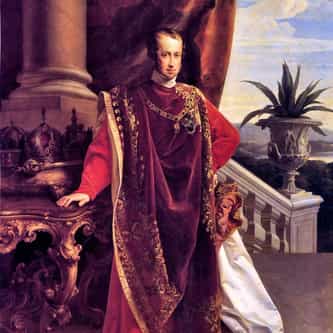 Ferdinand I of Austria

Ferdinand I (German: Ferdinand I.; 19 April 1793 – 29 June 1875) was the Emperor of Austria from 1835 until his abdication in 1848. As ruler of Austria, he was also President of the German Confederation, King of Hungary, Croatia and Bohemia (as Ferdinand V), King of Lombardy–Venetia and holder of many other lesser titles (see grand title of the Emperor of Austria). Due to his rocky, passive but good-intended character, he gained the sobriquet The Benign (German: Der Gütige) or The ... more on Wikipedia

Ferdinand I of Austria IS LISTED ON

11.9M VIEWS Royals Who Suffered From Hereditary Mutations And Defects Caused By Inbreeding