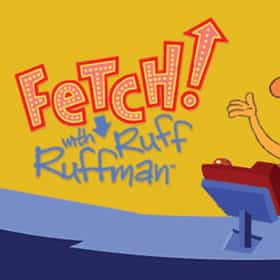 Fetch! with Ruff Ruffman, sometimes shortened as Fetch!, is a children's television series on PBS during the PBS Kids Go! block of educational programming. It is a reality-game show that is hosted by an animated anthropomorphic dog named Ruff Ruffman who dispenses challenges to the show's real-life contestants. The series ran for five seasons and 100 episodes from May 29, 2006 to November 4, 2010 on PBS, with 30 contestants in that time. In June 2010, WGBH announced that the series would end due to lack of funding. In June 2008, the series received its first Emmy for Best Original Song for its theme. ... more on Wikipedia

Fetch! with Ruff Ruffman is ranked on...

#19 of 51 The Best PBS Cartoons of All Time 42k VOTES This list contains information about the best PBS cartoons, ranked by your votes. Over the years, PBS has aired a variety of...
#127 of 139 The Dumbest Reality Shows of All Time 94.4k VOTES Reality shows are stupid. No one's really denying it at this point. Yet they continue to prove massively popular - if arguab...
#71 of 75 The Greatest Game Shows of All Time 34.6k VOTES What are the greatest game shows of all time? If there's one staple of American television, it's the game show. Over the dec...
#66 of 374 The Best Children's TV Shows 47.7k VOTES Here you have it, folks: a list of the very best kids' shows on television, ranked from best to worst, as voted on by people...
#28 of 31 The Best Game Shows of the 2000s 6.1k VOTES If you’re a fan of both television and board games, chances are you're also a big fan of televised game shows. Most of the...
#10 of 29 The Best PBS KIDS Sprout TV Shows 6.9k VOTES List of popular PBS Kids Sprout shows, ranked from best to worst. This list of the top current and cancelled PBS Kids Sprout...
#5 of 36 The Best Game Shows For Kids Ever Made 220 VOTES When you're a kid, getting $10 makes you feel like a millionaire. That's why so many children tuned in each week to watch th...