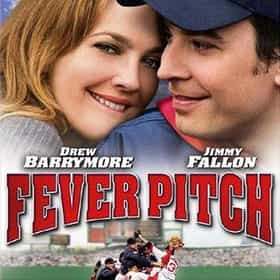 Fever Pitch is a 2005 Farrelly brothers romantic comedy film starring Drew Barrymore and Jimmy Fallon. It is a remake of a 1997 British film of the same name. Both films are loosely based on the Nick Hornby book of the same name, a best-selling memoir in the United Kingdom. Hornby also wrote the screenplay for the original film, but had no input for the American remake. While both the book and the original 1997 film are about association football, this version, aimed at the U.S. market, is about baseball. Both Fever Pitch films feature dramatic or unexpected sporting victories, the original focusing on Arsenal's last minute League title win in 1989, and the remake on the Boston Red ... more on Wikipedia

Fever Pitch is ranked on...

Fever Pitch is also found on...