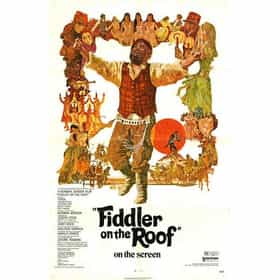 Fiddler on the Roof is a 1971 American musical comedy-drama film produced and directed by Norman Jewison. It is an adaptation of the 1964 Broadway musical of the same name, with music composed by Jerry Bock, lyrics by Sheldon Harnick, and screenplay by Joseph Stein. The film won three Academy Awards, including one for arranger-conductor John Williams. It was nominated for several more, including Best Picture, Best Actor for Chaim Topol as Tevye, and Best Supporting Actor for Leonard Frey, who played Mottel Kamzoil the Tailor. The decision to cast Topol, instead of Zero Mostel, as Tevye was a somewhat controversial one, as the role had originated with Mostel and he had made it famous. ... more on Wikipedia

lists about Fiddler on the Roof

Fiddler on the Roof is ranked on...

#485 of 1,699 The Most Rewatchable Movies 3.3M VOTES There are some movies that I always stop at and watch if I see them on TV or I can put in the DVD player and watch when I'm ...
#613 of 6,114 People who voted for Fiddler on the Roof... also upvote Samuel L. Jackson on The Best Actors Working Today also upvote Patrick Stewart on The Best Actors Working Today The Best Movies of All Time 5.6M VOTES These are the best movies of all time, ranked by movie experts and film fans alike. What are the greatest movies of all time...
#12 of 371 The Best Musical Movies of All Time 151.1k VOTES The best musical movies of all time, ranked by fans and critics. This list include both the best original musical movies and...
#20 of 223 Musical Movies With the Best Songs 95.1k VOTES What are the greatest musical movies with the best songs? This list includes many of the greatest movies ever made, in large...
#273 of 347 The Best Movies Based On Books 136.3k VOTES List of the best movies based off books, voted on by cine-bibliophiles everywhere. Many movies are based off of books but wh...
#111 of 591 The Best '70s Movies 69.4k VOTES This list of the best movies of the '70s includes all of the top films from the 1970s, including some of the best movies eve...
#77 of 241 The Most Inspirational Movies Ever 46.7k VOTES This inspirational movies list, with videos, includes some of the most uplifting films of all time. Inspiring films do not c...
#5 of 23 The Best Musical Movies Nominated for Best Picture 1.2k VOTES Sometimes, movies can inspire you to break out into song. No wonder so many movie musicals have been nominated for the Aca...
#64 of 68 The Best Movies That Are Super Long 36.1k VOTES Hollywood movies typically run about 1.5 to 2 hours. The patented three act structure unfolds onscreen and the credits roll ...
#10 of 119 The Most Rewatchable Movie Musicals 2.5k VOTES Musicals are some of the best comfort movies and often we end up memorizing every song. This is a list of musical movies we ...
#23 of 126 The Best Oscar-Winning Scores 9.6k VOTES What is best Oscar-winning musical film score? This list includes every film score that has won an Academy Award. Oscar-winn...
#144 of 318 The Best Political Films Ever Made 24.6k VOTES Political movies can approach the notion of politics and government from numerous perspectives, and with many wildly diverge...
#11 of 163 The Best Musical Movies Rated G 7.9k VOTES A list of the best G-Rated musical movies ever made, ranked by film fans' votes. This list is ordered by popularity, so only...
#8 of 120 The Best Movies of 1971 6k VOTES List of the best movies of 1971, with movie trailers when available. Academy Award winning actor Daniel Day-Lewis made his b...
#78 of 78 The Best Movies About Character Reinventing Themselves 1.6k VOTES This list contains information on the best movies about characters reinventing themselves, ranked from best to worst by user...
#10 of 101 The Best G-Rated Romance Movies 2.7k VOTES List of G-Rated romance movies, ranked from best to worst with movie trailers when available. This list takes the best G-Rat...
#12 of 65 The Greatest Musical Comedies, Ranked 5.7k VOTES   Like spaghetti and meatballs and peanut butter and jelly, music and comedy are a match made in heaven. The best mus...
#8 of 27 The Best Musicals On Amazon Prime 1.3k VOTES   The Best Musicals on Amazon Prime is a complete Amazon Prime streaming list for your perusal. All the best musical ...
#21 of 195 The Best G-Rated Comedies 6.3k VOTES List of G-Rated kids' comedies, ranked from best to worst with movie trailers when available. These comedies are all G-Rated...
#15 of 40 The Best Movies About Sisters 2.2k VOTES There’s nothing quite as powerful as the bond between sisters – although sometimes there’s nothing more complicated than sib...
#18 of 49 The Best Movies for 11 Year Old Girls 267 VOTES The best films for 11 year olds need to be a number of different things. First and foremost, they need to be engaging, moder...

Fiddler on the Roof is also found on...