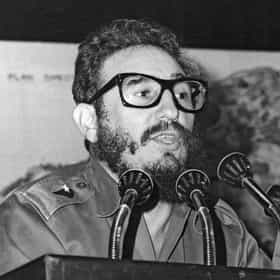 Fidel Alejandro Castro Ruz (American Spanish: [fiˈðel aleˈxandɾo ˈkastɾo ˈrus]; 13 August 1926 – 25 November 2016) was a Cuban communist revolutionary and politician who governed the Republic of Cuba as Prime Minister from 1959 to 1976 and then as President from 1976 to 2008. A Marxist–Leninist and Cuban nationalist, Castro also served as the First Secretary of the Communist Party of Cuba from 1961 until 2011. Under his administration, Cuba became a one-party communist state, while industry and business were nationalized and state socialist reforms were implemented throughout society. Born in Birán, Oriente as the son of a wealthy Spanish farmer, Castro adopted leftist ... more on Wikipedia

10 Bizarre Plans The U.S. Government Had For Assassinating Fidel Castro 3.9k views If there was one thing the United States hated during the Cold War, it was Communism, and Cuban President Fidel Castro was p...

Fidel Castro is ranked on...

Fidel Castro is also found on...