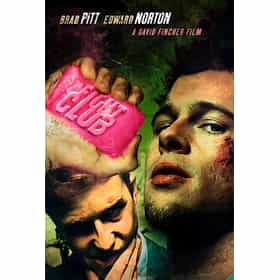 Fight Club is a 1999 film based on the 1996 novel of the same name by Chuck Palahniuk. The film was directed by David Fincher, and stars Brad Pitt, Edward Norton and Helena Bonham Carter. Norton plays the unnamed protagonist, an "everyman" who is discontented with his white-collar job. He forms a "fight club" with soap maker Tyler Durden, played by Pitt, and they are joined by men who also want to fight recreationally. The narrator becomes embroiled in a relationship with Durden and a dissolute woman, Marla Singer, played by Bonham Carter. Palahniuk's novel was optioned by 20th Century Fox producer Laura Ziskin, who hired Jim Uhls to write the film adaptation. ... more on Wikipedia

Inception
Little Details That Should've Made The Twist In 'Fight Club' Obvious 17.5k views When Fight Club first hit theaters back in 1999, it received a lot of attention for its genuinely shocking plot twist. Nobod...
'Fight Club' Fan Theories That Just Might Be True 1.5k votes David Fincher’s Fight Club initially flopped at the box office in 1999, but it has since become a cult classic and one of th...
20 Surprising Facts You Didn't Know About Fight Club 249.3k views We're about to break the first two rules of Fight Club. Fight Club was one of those late '90s movies that was advertised hor...
12 Reasons Why Mr. Robot Is Fight Club for Millennials 11.4k views The striking similarities between Fight Club and Mr. Robot, USA Network's breakout hit show, have been the source of much In...
What to Watch If You Love Fight Club 668 votes Sex, violence, and anarchy combine to make Fight Club a favorite among film buffs. This list contains recommendations for mo...
The Best 'Fight Club' Movie Quotes 614 votes Best Fight Club quotes, ranked by fans. This list of great movie quotes from Fight Club collects all of the most famous line...

Fight Club is ranked on...

Fight Club is also found on...