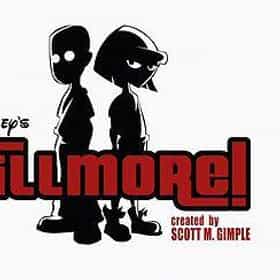 Fillmore! is an American animated television series created by Scott M. Gimple for ABC and, later, Toon Disney. Based on popular police dramas of the 1970s, Fillmore! is centered on reformed juvenile delinquent Cornelius Fillmore and his partner Ingrid Third, who solve crimes as members of the Safety Patrol at X Middle School. The series was aimed at young teenagers, but also skewed an older audience with its '70s references It was the final series produced solely by Walt Disney Television Animation, before producing shows exclusively with Disney Channel, and also the final ABC Saturday morning cartoon. The series was cancelled in 2004 due to low ratings, but maintains a dedicated ... more on Wikipedia

Fillmore! is ranked on...

#346 of 729 People who voted for Fillmore!... also upvote Star Trek Franchise on The Greatest Sci-Fi Movies of All Time also upvote Star Trek Franchise on The Best Space Movies The Best Cartoons of All Time 2.9M VOTES There have been many fantastic animated TV shows throughout the history, but which ones are the best? Some people think that...
#257 of 487 The Greatest Animated Series Ever Made 621k VOTES The top animated series of all time include some of the best TV shows ever to flicker in your living room (or on your comput...
#44 of 44 The Best Children's Cartoons with Adult Humor 13.4k VOTES The absolute best children’s cartoons with adult humor, ranked from the most popular to the least based by the Ranker commun...
#160 of 374 The Best Children's TV Shows 46.2k VOTES Here you have it, folks: a list of the very best kids' shows on television, ranked from best to worst, as voted on by people...
#27 of 51 The Best Toon Disney TV Shows 10.5k VOTES List of popular Toon Disney shows, ranked from best to worst. This list of the top Toon Disney TV series, both current and...
#25 of 34 The Greatest Suspense TV Shows 619 VOTES Of all the many genres represented on television, suspense is easily the most fun to watch. Suspense offers the audience a w...

Fillmore! is also found on...