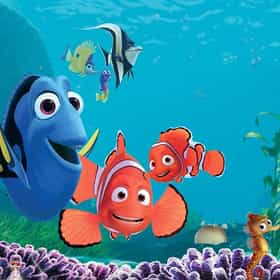 Finding Nemo is a 2003 American computer-animated comedy-drama adventure film produced by Pixar Animation Studios and released by Walt Disney Pictures. Written and directed by Andrew Stanton, it tells the story of the overprotective clownfish named Marlin who, along with a regal tang named Dory, searches for his son Nemo all the way to Sydney Harbour. Along the way, Marlin learns to take risks and let Nemo take care of himself. The film was re-released for the first time in 3D on September 14, 2012, and it was released on Blu-ray on December 4, 2012. ... more on Wikipedia

Finding Dory Movie Quotes 146 votes Finding Dory movie quotes bring the beloved story which began in the 2003 animated film Finding Nemo back to theaters for an...
The Best 'Finding Nemo' Quotes 178 views The best Finding Nemo quotes make you realize how great the movie really is, even if you haven't seen it in a while. Let's r...

Finding Nemo is ranked on...

Finding Nemo is also found on...