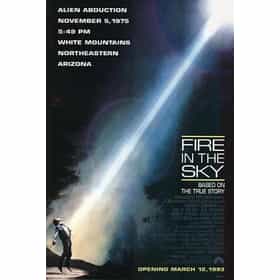 Fire in the Sky

This film is a 1993 science fiction horror drama film based on an alleged extraterrestrial encounter, directed by Robert Lieberman, and written by Tracy Tormé based on Travis Walton's book The Walton Experience. The film stars Robert Patrick in the leading role as Walton's best friend and future brother-in-law, Mike Rogers, and D. B. Sweeney as Walton himself. James Garner, Craig Sheffer, Scott MacDonald, Henry Thomas, and Peter Berg also star. ... more on Wikipedia

Fire in the Sky is ranked on...

Fire in the Sky is also found on...