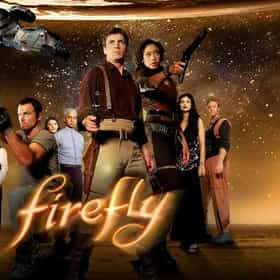 Firefly is an American space western science fiction drama television series created by writer and director Joss Whedon, under his Mutant Enemy Productions label. Whedon served as an executive producer, along with Tim Minear. The series is set in the year 2517, after the arrival of humans in a new star system and follows the adventures of the renegade crew of Serenity, a "Firefly-class" spaceship. The ensemble cast portrays the nine characters who live on Serenity. Whedon pitched the show as "nine people looking into the blackness of space and seeing nine different things". The show explores the lives of a group of people who fought on the losing side of a civil ... more on Wikipedia

13 Crazy Yet Plausible Fan Theories About Firefly 10.7k votes “Take my love, take my land, Take me where I cannot stand. I don't care, I'm still free, You can't take the sky from me. “ ...
14 Fun Facts About Joss Whedon's 'Firefly' Even Diehard Fans Don't Know 14.2k views Is there a TV show that gets more love from fans than Firefly? Despite a truncated season and an unceremonious cancellation ...
The Best Episodes of 'Firefly' 93 votes There are so many good episodes of Firefly, but which ones really stand out? Do you like "Heart of Gold" the best,...

Firefly is ranked on...

Firefly is also found on...