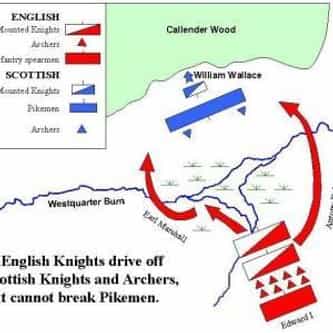 The First War of Scottish Independence was the initial chapter of engagements in a series of warring periods between English and Scottish forces lasting from the invasion by England in 1296 until the de jure restoration of Scottish independence with the Treaty of Edinburgh-Northampton in 1328. De facto independence was established in 1314 at the Battle of Bannockburn. England attempted to establish its authority over Scotland while the Scots fought to keep English rule and authority out of ... more on Wikipedia