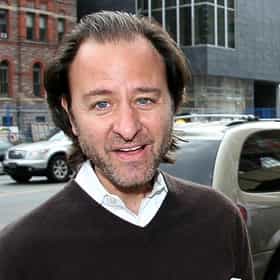 Fisher Stevens (born Steven Fisher; November 27, 1963) is an American actor, director, producer and writer. As an actor, he is best known for his portrayals of Ben Jabituya in Short Circuit (renamed "Ben Jahveri" in the sequel), Chuck Fishman on the 1990s television series Early Edition, and villainous computer genius Eugene "The Plague" Belford in Hackers. His most recent successes include the 2010 Academy Award for Best Documentary Feature for his film The Cove and the 2008 Independent Spirit Award for Best Documentary Feature for his film Crazy Love. In addition, he has directed the Leonardo DiCaprio-produced documentary Before the Flood, which is executively ... more on Wikipedia

Fisher Stevens is ranked on...

#29 of 44 The Best Fish Things That Are Not Really Fish 2.9k VOTES Ranker has fish in the office. They are real fish with real bodies and real lives, real dreams, and real heartbreak. This li...
Celebrities You Didn't Know Use Stage Names 1.8M VIEWS List of celebrities with stage names, loosely ranked according to fame and popularity. It's tough to break into show busin...
Michelle Pfeiffer Loves and Hookups 8.5k VIEWS Who is Michelle Pfeiffer dating? Many famous men have dated Michelle Pfeiffer, and this list will give you more details abou...
What Happened To All The Boyfriends On 'Friends' You Barely Remember Now? 6k VIEWS Over the course of the ten years of Friends, boyfriends and girlfriends had a tendency to come and go. In particular, Rachel...

Fisher Stevens is also found on...