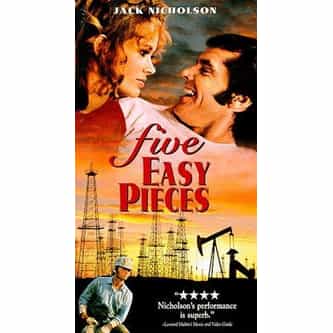 Tagline
He Rode The Fast Lane On The Road To Nowhere.

Five Easy Pieces is a 1970 American drama film written by Carole Eastman and Bob Rafelson, and directed by Rafelson. The film stars Jack Nicholson, with Karen Black, Susan Anspach, Ralph Waite, and Sally Struthers in supporting roles. The film tells the story of a surly oil rig worker, Bobby Dupea, whose seemingly rootless, blue-collar existence belies his privileged youth as a piano prodigy. When Bobby learns that his father is dying, he goes home to see him, bringing along his pregnant ... more on Wikipedia

Five Easy Pieces IS LISTED ON