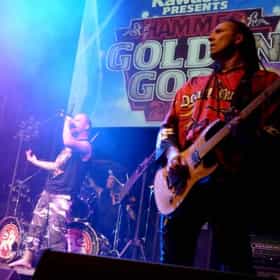 Five Finger Death Punch is an American metal band from Las Vegas, Nevada. Formed in 2005, the group's name is derived from classic martial arts cinema. The band originally consisted of vocalist Ivan Moody, guitarist Zoltan Bathory, guitarist Caleb Andrew Bingham, bassist Matt Snell, and drummer Jeremy Spencer. Bingham was replaced by guitarist Darrell Roberts in 2006, who was then replaced by Jason Hook in 2009. Bassist Matt Snell departed from the band in 2010 and was replaced by Chris Kael in 2011. Their debut album The Way of the Fist was released in 2007. Following its release, the band began achieving success rapidly. The 2009 follow-up album War Is the Answer further increased ... more on Wikipedia

#701 of 2,187 The Greatest Musical Artists of All Time 13.4M VOTES When VH1 polled fellow artists to name the greatest artists of all time, it seemed like a good idea---but in reality, the li...
#27 of 358 The Worst Rock Bands of All Time 744.5k VOTES Here they are: the absolute worst rock bands in history, ranked from the most awful bands to the kind of okay but still pret...
#344 of 2,218 The Best Rock Bands of All Time 3.2M VOTES There are thousands of rock bands that have existed throughout the decades ever since the dawn of rock and roll, but only th...
#6 of 74 The Best Bands Named After Body Parts 1.9k VOTES Plenty of musicians are inspired to name their bands after famous people, animals, or even colors. You’ll also find a surpri...
#25 of 130 People who voted for Five Finger Death Punch... also upvote Star Wars Franchise on The Best Movies of All Time The Best Screamo Bands of All Time 69.4k VOTES Who are the best screamo bands of all time? Everyone has an opinion about which musicians are the greatest when it comes to ...
#49 of 110 The Greatest Rock Artists Of The 2010s 1.4k VOTES Here are the best rock artists of the decade, ranked by fans everywhere. Featuring classic rock bands, talented singer-...
#34 of 115 The Best Bands with Numbers in Their Names 7.8k VOTES What’s the most famous band with numbers in their name? Drawing a blank? This list of number band names will help. You might...
#44 of 184 The Best Groove Metal Bands 13.8k VOTES Groove metal artists list, with photos, ranked best to worst by votes. List of good groove metal bands includes a filter so ...
#23 of 30 The Best Heavy Metal Bands Of 2020, Ranked 213 VOTES Whether you like face-melting guitar solos or dark vocals, the best heavy metal groups of 2020 have it all. The 2020 class o...
#9 of 32 The Best Rock Bands Of 2020, Ranked 255 VOTES Whether you like ripping guitar riffs or massive drum solos, the best rock bands of 2020 have it all. The 2020 class of rock...