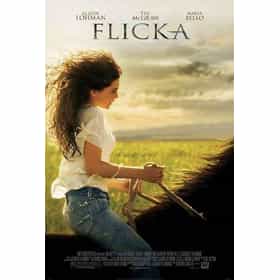 Flicka is a 2006 film loosely based on the 1941 children's novel My Friend Flicka by Mary O'Hara. The film is directed by Michael Mayer. The novel has previously been made into a film in 1943, and served as the inspiration for a 39-episode TV series in 1956–1957. In this version, set in the 21st century, the protagonist isn't a boy, but a girl, played by Alison Lohman. The movie also features Maria Bello, Ryan Kwanten and country singer Tim McGraw, who also served as executive producer of the soundtrack album. This USD15 million-budgeted film grossed $21 million in the United States theaters, and then it went on to become a surprise hit in DVD market in the United States; it made more ... more on Wikipedia

Flicka is ranked on...

Flicka is also found on...