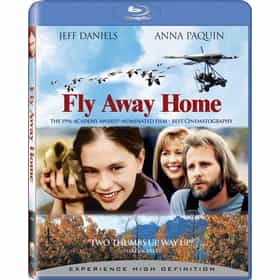 Fly Away Home is a 1996 family drama film directed by Carroll Ballard. The film stars Anna Paquin, Jeff Daniels and Dana Delany. The film was released on September 13, 1996 by Columbia Pictures. The story follows a young girl from New Zealand who survives an incident that results in the end of her mother's life. The young girl is sent to live with her father on an Ontario farm, where she adopts a brood of Canada geese chicks. When the birds imprint on her as their Mother Goose, she realizes that unless she and her father can teach the birds a migration route from Ontario to North Carolina, the birds will not be able to survive the winter. ... more on Wikipedia

Fly Away Home is ranked on...

Fly Away Home is also found on...