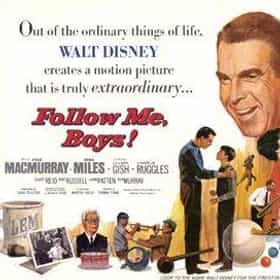 Follow Me, Boys! is a 1966 family film produced by Walt Disney Productions, based on the book God and My Country by MacKinlay Kantor. The film starred Fred MacMurray, Vera Miles, Lillian Gish, Charles Ruggles, and Kurt Russell, was co-produced by Walt Disney and Winston Hibler, directed by Norman Tokar, and written by Louis Pelletier. The film is also known by its working title, On My Honor. It is one of the few movies where Boy Scouts are key to the film and is Disney's paean to the Boy Scouts. ... more on Wikipedia