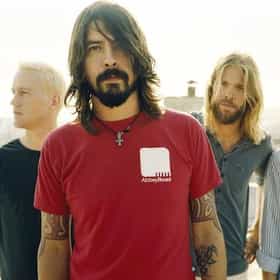 Foo Fighters is an American rock band, formed in Seattle in 1994. It was founded by Nirvana drummer Dave Grohl as a one-man project following the death of Kurt Cobain and the resulting dissolution of his previous band. The group got its name from the UFOs and various aerial phenomena that were reported by Allied aircraft pilots in World War II, which were known collectively as foo fighters. Prior to the release of Foo Fighters' 1995 debut album Foo Fighters, which featured Grohl as the only official member, Grohl recruited bassist Nate Mendel and drummer William Goldsmith, both formerly of Sunny Day Real Estate, as well as fellow Nirvana touring bandmate Pat Smear as guitarist to ... more on Wikipedia

Foo Fighters is ranked on...

#58 of 284 Musicians Who Belong in the Rock and Roll Hall of Fame 421.1k VOTES Update: the Rock and Roll Hall of Fame has listened to your feedback and inducted a number of artists on this list sinc...
#262 of 358 People who voted for Foo Fighters... People in the Central US are 3x more likely to vote for this The Worst Rock Bands of All Time 744.5k VOTES Here they are: the absolute worst rock bands in history, ranked from the most awful bands to the kind of okay but still pret...
#41 of 2,218 People who voted for Foo Fighters... also upvote Dark Knight Franchise on The Best Movies of All Time also upvote Star Wars Franchise on The Greatest Sci-Fi Movies of All Time The Best Rock Bands of All Time 3.2M VOTES There are thousands of rock bands that have existed throughout the decades ever since the dawn of rock and roll, but only th...
#40 of 632 The Greatest Live Bands of All Time 330.1k VOTES List of the greatest live bands or artists of all time, created and ranked by music fans worldwide asks the question "w...
#141 of 570 The Most Hipster Bands 178.1k VOTES Since the mid-2000s, the word hipster has invaded the lexicon of pop culture and has become a term, for better or worse, syn...
#5 of 97 '90s Greats Making the Best Music Today 33.4k VOTES A list of 90s greats making the best music today. While many of their contemporaries have either fallen to the wayside or sp...
#25 of 76 People who voted for Foo Fighters... People Age 30 to 49 are 2x more likely to vote for this The Greatest Rock Band Logos of All Time 51.9k VOTES Picking the best band logos of all time turned out to be quite a task. When asking people about their favorite band logos, m...
#3 of 88 Acts You'd Like To See As The Super Bowl Half Time Show 23.5k VOTES Musical acts Maroon 5, Travis Scott, and Big Bio are the most recent performers to agree to tackle the Super Bowl halftime s...
#6 of 94 The Best Opening Act You've Ever Seen 15.2k VOTES What are the best opening acts you've ever seen? These are the bands and musicians that blew you away, making you a fan fo...
#28 of 50 The Best Things From Seattle 7.6k VOTES Seattle, WA, is consistently considered one of the top cities in America, and for good reason. Seattle is known for many dif...
#14 of 57 Who Should Play the Super Bowl Halftime Show? 6.6k VOTES UPDATE: On December 3, 2015, it was announced that Coldplay will perform at the 2016 Super Bowl halftime show. The 2016 Sup...
#13 of 75 The Best Dadrock Bands That Are Totally Worth Your Time 23.8k VOTES The Urban Dictionary defines "Dadrock" as "classic rock you first heard from your dad's old re...
#16 of 110 The Greatest Musical Artists Of The 2010s 11.4k VOTES From Kanye West and Taylor Swift to Bruno Mars and Janelle Monáe, we're ranking the best artists of the decade. ...
#6 of 101 The Best Musical Artists From Washington 1.4k VOTES Here are the best artists and bands from Washington. Seattle, the largest city in the state, is known as the birthplace of g...
#6 of 673 People who voted for Foo Fighters... People under 30 are 2x more likely to vote for this The Best Alternative Bands/Artists 196.4k VOTES At the end of the 1980s, at the peak of glam rock and hair metal, a new genre began to emerge from the underground. Since it...
#3 of 110 The Greatest Rock Artists Of The 2010s 1.4k VOTES Here are the best rock artists of the decade, ranked by fans everywhere. Featuring classic rock bands, talented singer-...
#3 of 35 Who Is The Most Famous Rock Band In The World Right Now? 22.3k VOTES With so many great new bands out, as well as all-time greats who still tour, determining the most famous rock bands in the w...
All Howard Stern Show Musical Performers 66.3k VIEWS List of all artists and bands who have played live on The Howard Stern show over the years. As you can see, many great bands...
#7 of 35 The Best Alternative Rock Bands Of 2019, Ranked 1.7k VOTES Updated: check out our list of the top 10 alternative rock bands of 2020! Whether you like infectious guitar riffs or wry ...
Every Band & Musician Who Has Performed on Saturday Night Live 106.4k VIEWS Live from the main stage at 30 Rockefeller Plaza, this is a list of every band, musician, and singer who has performed on Sa...
#19 of 152 The Best Musicians Who Performed on SNL In The '00s 395 VOTES From the 9/11 attacks to the writers strike that shortened season 33 to some big cast shakeups mid-decade, Saturday Night Li...

Foo Fighters is also found on...