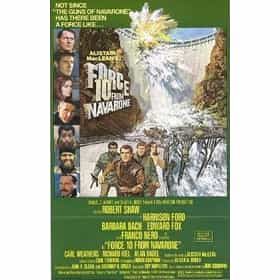 Force 10 from Navarone is a 1978 British produced film loosely based on Alistair MacLean's 1968 novel of the same name. It is a sequel to the 1961 film, The Guns of Navarone. The parts of Mallory and Miller are played by Robert Shaw and Edward Fox, succeeding the roles originally portrayed by Gregory Peck and David Niven. It was directed by Guy Hamilton and also stars Harrison Ford, Carl Weathers, Barbara Bach, Franco Nero, and Richard Kiel. ... more on Wikipedia

Force 10 from Navarone is ranked on...

Force 10 from Navarone is also found on...