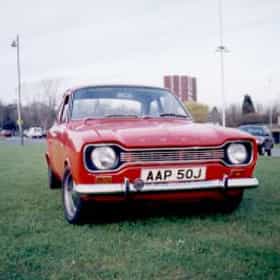 The Ford Escort was a small family car that was manufactured by Ford from 1968 to 2004. The Ford Escort name was also applied to several different small cars produced in North America by Ford between 1981 and 2003. Ford has relaunched the Ford Escort on the Chinese car market in 2014. The first use of the Escort name was for a reduced specification version of the Ford Squire, a 1950s estate car version of the Ford Anglia 100E, though this did not sell well by comparison to the other members of the 100E family. ... more on Wikipedia

Ford Escort is also found on...