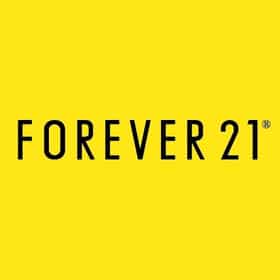 Forever 21 is an American chain of fashion retailers with its headquarters in Los Angeles, California and sales of $3.7 billion in 2013. Forbes ranked Forever 21 as the 122nd largest private company in America. From the initial, small, 900 square ft. Los Angeles store in 1984 to over 480 locations in the United States and abroad today, Forever 21 has experienced immense growth. The stores themselves have also expanded, with an average size of 38,000 square ft. and 24,000 square ft. XXI flagship stores. According to Adrienne Tennant, an analyst at Wedbush Morgan Securities, and Andrea Chang of the Los Angeles Times, Forever 21 is known for its trendy offerings and its economical ... more on Wikipedia

Times Forever 21 Took Things Way Too Far 1.5k votes Forever 21 is one of those fast fashion stores that you go to when you need a banging outfit at the very the last minute. Ev...