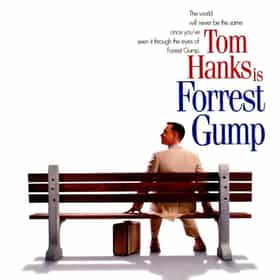 Forrest Gump is a 1994 American epic romantic-comedy-drama film based on the 1986 novel of the same name by Winston Groom. The film was directed by Robert Zemeckis and stars Tom Hanks, Robin Wright, Gary Sinise, Mykelti Williamson, and Sally Field. The story depicts several decades in the life of Forrest Gump, a slow-witted and naïve, but good-hearted and athletically prodigious, man from Alabama who witnesses, and in some cases influences, some of the defining events of the latter half of the 20th century in the United States; more specifically, the period between Forrest's birth in 1944 and 1982. The film differs substantially from Winston Groom's novel on which it was based, ... more on Wikipedia

The ‘Forrest Gump’ Book Is Weirder And More Offensive Than The Movie 3.5k views For most people, watching a movie based on a favorite book is usually a gamble. Often, the movie doesn't live up to the expe...
20 Crazy Behind-the-Scenes Facts About Forrest Gump 430.4k views It’s hard to believe Forrest Gump came close to not getting made. The film went through several re-writes, and was extremely...
16 Extremely Messed Up Things About Forrest Gump That'll Change How You See It 447.7k views A lot of people love Forrest Gump, and that's understandable. Wrong, but understandable. It’s sweet, it's nice, and Tom Hank...
The Most Memorable Quotes From 'Forrest Gump' 134 votes Get ready to run with the best Forrest Gump quotes. Based on the Winston Groom novel, the 1994 Oscar winning film is filled ...

Forrest Gump is ranked on...

Forrest Gump is also found on...