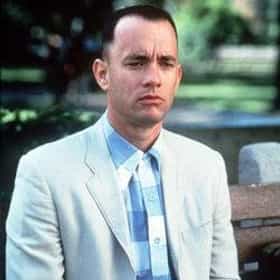 Forrest Gump is a fictional character and the protagonist of the 1986 novel by Winston Groom, Robert Zemeckis's 1994 film of the same name, and Gump and Co., the written sequel to Groom's novel. In the film, Forrest is a philanthropist and a war veteran, businessman, and college football player who bears witness to various significant occurrences in the 20th century. He exudes a compassionate, optimistic, and tenacious attitude in the face of countless setbacks and strives to help every person he meets despite his strong naivety. Throughout his life, he maintains a sincere love for his childhood friend Jennifer Curran, who eventually becomes his wife. Tom Hanks portrayed the character ... more on Wikipedia

Forrest Gump is ranked on...

#1 of 3,827 People who voted for Forrest Gump... People in the South are 2x more likely to vote for this also upvote Diego Maradona on The Best Soccer Players of All Time The Best Movie Characters of All Time 1M VOTES List of the best movie characters of all time, ranked by film buffs and people like you. This list includes performances by ...
#1 of 148 The Very Best Oscar Winning Performances 50.2k VOTES Over the years, there have been so many great actors and actresses who have won Oscars for portraying classic characters. So...
#1 of 25 The Greatest Characters Played by Tom Hanks, Ranked 1.5k VOTES This list contains information on the best characters played by Tom Hanks ranked from best to worst by user votes. The top T...
#1 of 64 The Best Oscar-Winning Actor Performances, Ranked 68.2k VOTES Over the years, many great actors and actresses have been awarded the title of "Best Actor" for their portrayal of...
#12 of 22 Kid Versions of Adult Actors All Grown Up 489.7k VOTES Sometimes casting directors just flat out nail it when it comes to kid versions of adult actors. They're the choices that ma...
#6 of 35 Film and TV Characters Most Doomed to Spend Forever in the Friendzone 5.2k VOTES "Friendzone" – a hellish pit of loneliness one finds himself (or herself) when the object of his/her affections sa...
#2 of 23 The Greatest Billionaire Characters in Film 2k VOTES They're rich, powerful, influential – and did we mention rich? Billionaires are popular characters in films, whether these u...
#1 of 41 The Best Fictional Characters Who Never Give Up 7.3k VOTES Perseverance is one of the most admirable traits a person can have and it’s quite common in fiction to have a protagonist ...

Forrest Gump is also found on...