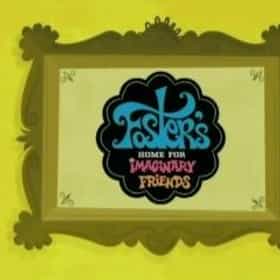 Foster's Home for Imaginary Friends is an American animated television series created and produced at Cartoon Network Studios by animator Craig McCracken. It first premiered on Cartoon Network on August 13, 2004, at 7:30 pm E/P as a 90-minute television movie, which led to a series of half-hour episodes. The series aired on Cartoon Network and its affiliates worldwide, except in Canada where it aired on English and Francophone Teletoon networks. The show finished its run on May 3, 2009 with a total of six seasons and seventy-nine episodes. ... more on Wikipedia

Foster's Home for Imaginary Friends is ranked on...

#53 of 717 People who voted for Foster's Home for Imaginary Friends... People under 30 are 2x more likely to vote for this also upvote Harry Potter Franchise on The Most Rewatchable Movies The Best Cartoons of All Time 3M VOTES There have been many fantastic animated TV shows throughout the history, but which ones are the best? Some people think that...
#96 of 477 The Greatest Animated Series Ever Made 642.2k VOTES The top animated series of all time include some of the best TV shows ever to flicker in your living room (or on your comput...
#90 of 129 The Best Cartoons of the '90s 766.6k VOTES The best cartoons of the 90s are those the top animated series that ran between the years of 1990 and 2000 and features Nick...
#45 of 236 The Greatest Cartoon Theme Songs of All Time 163.8k VOTES For entire generations of kids, some of their most fond memories are of watching Saturday morning cartoons. The animated sho...
#86 of 141 The Worst TV Series Finales Ever 164.7k VOTES The worst final episodes of great TV shows have a history almost as old as TV itself. Whenever an audience becomes so invest...
#276 of 422 The Best TV Shows to Rewatch 133.5k VOTES List of the best TV shows to rewatch, as ranked by television fans and critics. When the weekend comes around and you can’t ...
#42 of 238 The Best Cartoons to Watch Stoned 64.7k VOTES Do you often wonder, “what are the best shows to watch high?” Or, more specifically, “what are the best cartoons to watch hi...
#6 of 134 The Best Cartoon Network TV Shows 495.3k VOTES Cartoon Network shows have been bringing some of the funniest and most action-packed cartoons that both kids and adults can ...
#57 of 135 The Very Best Cartoon TV Shows 40.2k VOTES The very best cartoon series shows on television, ranked from best to worst. This list of the greatest cartoon series shows ...
#9 of 18 The Best Family Adventure Series 99 VOTES Navigating new worlds while also trying to keep the kids in line, testing parental rules while battling monsters, and saving...