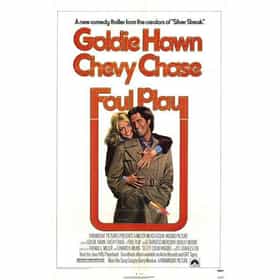 Foul Play is a 1978 American comic mystery/thriller film written and directed by Colin Higgins, and starring Goldie Hawn, Chevy Chase, Dudley Moore, Burgess Meredith, Eugene Roche, Rachel Roberts, Brian Dennehy and Billy Barty. In it, a recently divorced librarian is drawn into a mystery when a stranger hides a roll of film in a pack of cigarettes and gives it to her for safekeeping. The film inspired an ABC television series starring Barry Bostwick and Deborah Raffin that aired in early 1981 and was cancelled after six episodes. ... more on Wikipedia

Foul Play is ranked on...

Foul Play is also found on...