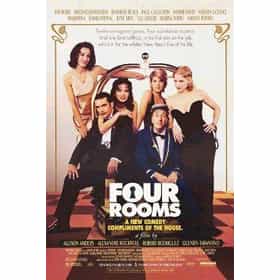 Four Rooms is a 1995 anthology comedy film directed by Allison Anders, Alexandre Rockwell, Robert Rodriguez, and Quentin Tarantino, each directing one segment of the film that in its entirety is loosely based on the adult short fiction writings of Roald Dahl, especially Man from the South which is the basis for the last segment, Penthouse - "The Man from Hollywood" directed by Tarantino. The story is set in the fictional Hotel Mon Signor in Los Angeles on New Year's Eve. Tim Roth plays the hotel bellhop, the main character in the frame story, whose first night on the job consists of four very different encounters with various hotel guests. ... more on Wikipedia

Four Rooms is ranked on...

Four Rooms is also found on...