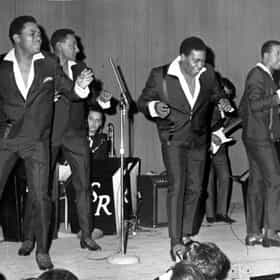 The Four Tops are a vocal quartet from Detroit, Michigan, USA, who helped to define the city's Motown sound of the 1960s. The group's repertoire has included soul music, R&B, disco, adult contemporary, doo-wop, jazz, and show tunes. Founded as the Four Aims, lead singer Levi Stubbs, Abdul "Duke" Fakir, Renaldo "Obie" Benson and Lawrence Payton remained together for over four decades, performing from 1953 until 1997 without a change in personnel. The Four Tops were among a number of groups, including the Miracles, the Marvelettes, Martha and the Vandellas, the Temptations, and the Supremes, who established the Motown Sound heard around the world during the 1960s. ... more on Wikipedia

Four Tops is ranked on...

#67 of 344 People who voted for Four Tops... People over 50 are 2x more likely to vote for this also upvote James Bond Franchise on Every James Bond Movie, Ranked Best to Worst The Greatest American Rock Bands 1.3M VOTES Update: Follow Ranker's official New Rock 2020 playlist on Spotify! Some of the greatest bands in rock history a...
#40 of 279 The Top Pop Artists of the 1960s 94.1k VOTES List of the best pop artists of the 60s, ranked. The 1960s may very well be the best decade for music in the rock era. Music...
#10 of 133 The Best Musical Artists From Michigan 13.7k VOTES Here are the best artists and bands from Michigan. Some of the most famous singers and bands of all time got their start in ...
#9 of 112 The Best Bands with Numbers in Their Names 8.1k VOTES What’s the most famous band with numbers in their name? Drawing a blank? This list of number band names will help. You might...
#23 of 221 The Greatest R&B Artists of All Time 16.3k VOTES Update: Follow Ranker's official New R&B 2020 playlist on Spotify! When it comes to the pop charts, R&B ...
#6 of 18 The Best Beach Music Bands/Artists 780 VOTES To many, beach music evokes images of the endless summer, surfing and all things from the California coast from the 1960s. H...

Four Tops is also found on...