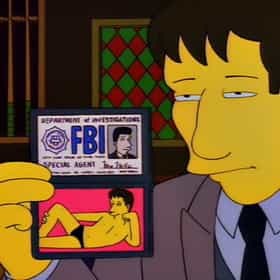 Fox William Mulder is a fictional character in the Fox science fiction-supernatural television series The X-Files, played by David Duchovny. An FBI Special Agent, Mulder's peers consider his theories on extraterrestrial activity as spooky and far-fetched. He also has a photographic memory and is red/green colorblind. With his FBI partner Dana Scully, he works in the X-Files office, which is concerned with cases with particularly mysterious or possibly paranormal circumstances that were left unsolved and shelved by the FBI. Mulder was a main character for the first seven seasons, but was limited to a recurring character for the last two seasons. Mulder made his first appearance in the ... more on Wikipedia

Fox Mulder is ranked on...

#47 of 1,608 People who voted for Fox Mulder... also upvote Lord of the Rings Franchise on The Best Movies of All Time also upvote Harry Potter Franchise on The Most Rewatchable Movies The Greatest TV Characters of All Time 1.2M VOTES List of TV's most memorable characters, of all time, chosen by the Ranker community. What makes a character live on in the p...
#15 of 92 The Best Will-They-or-Won't-They Couples in TV History 105.5k VOTES List of the best will-they-or-won’t-they couples in TV history, current or past. These ‘will they or won’t they?’ couples ha...
#45 of 137 The Best TV Characters of the 1990s 39.7k VOTES Who were the best TV characters of the '90s? From Frasier, Friends, and Married With Children all the way to kid favorites l...
#77 of 136 The Greatest Bad Boys in TV History 117.4k VOTES List of the greatest bad boys in TV history. Here is a listing of the cream of the crop when it comes to television's best b...
#45 of 70 The Best Fictional Characters You'd Leave Your Man For 74.1k VOTES We all like to fantasize and daydream about our favorite hot fictional characters. Maybe you've struck some kind of a deal w...
#7 of 156 The Greatest TV Character Losses of All Time 66k VOTES We all remember losing our favorite characters -- Elliot Stabler (Law & Order SVU), Mark Greene (ER), Diane Chambers (Ch...
#101 of 111 The Best Pop Culture Pet Names 14.7k VOTES Looking for a cute pop culture pet name for a new cat, dog, or even bird? Naming a pet is no easy decision, but this list of...
#127 of 131 Funny Names to Give a Fox 99.7k VOTES Whether you’re the proud owner of a pet fox or just have a fox hanging around your place, the fox needs a great name. This l...
#1 of 17 The Best Male & Female Cop Pairs on TV 269 VOTES A good team-up on TV is reason enough to tune into a series, any series, episode after episode for years. The show that two ...
#1 of 35 The Best Fictional FBI Agents 536 VOTES While CIA agents are out gallivanting across the world causing coups and destabilizing regions, the Federal Bureau of Invest...
#7 of 33 The Best Conspiracy Characters In Movies & TV 523 VOTES When it comes to conspiracy theories, it’s the characters that make these movies and shows so great. No matter how many...