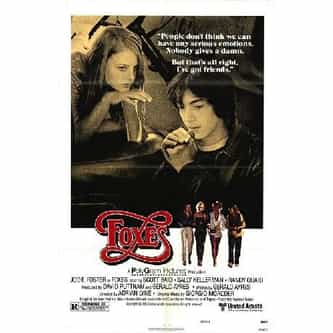 Foxes is a 1980 American teen drama film directed by Adrian Lyne and written by Gerald Ayres. The film stars Jodie Foster, Scott Baio, Sally Kellerman, Randy Quaid and Cherie Currie. The original music score is composed by Giorgio Moroder, and features the song "On the Radio", sung by Donna Summer. The film was generally ignored at the box office when it was first released in February 1980. At the time of its release, the film received a positive review from prominent film critic ... more on Wikipedia

Foxes IS LISTED ON