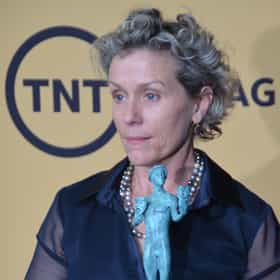 Frances Louise McDormand (born Cynthia Ann Smith, June 23, 1957) is an American actress. She is the recipient of numerous accolades, including two Academy Awards, two Primetime Emmy Awards, and a Tony Award, making her one of the few performers to achieve the Triple Crown of Acting. McDormand was educated at Bethany College and Yale University. She has starred in a number of films by the Coen brothers, including Blood Simple (1984), Raising Arizona (1987), Fargo (1996), The Man Who Wasn't There (2001), Burn After Reading (2008), and Hail, Caesar! (2016). For playing Marge Gunderson in Fargo, she won the Academy Award for Best Actress. Her other film roles include Mississippi Burning ... more on Wikipedia

Frances McDormand is ranked on...

Frances McDormand is also found on...