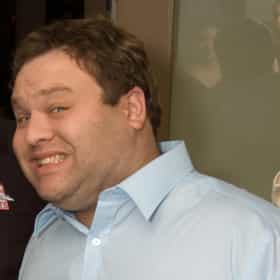 Frank Caliendo (born January 19, 1974) is an American comedian and impressionist, best known for his impersonations on the Fox Network television series MADtv, and as the in-house prognosticator for Fox NFL Sunday. Furthermore, he is a recurring guest on the Pardon My Take Podcast, presented by Barstool Sports. In 2007 and 2008, he performed his impersonations on his own show, Frank TV, which aired on TBS. He is known for his impressions and for his frequent appearances on The Bob & Tom Show. He has released six solo CDs. From 2009 to 2011 he had a show at the Monte Carlo Resort and Casino in Las Vegas. ... more on Wikipedia

Frank Caliendo is ranked on...

#16 of 35 The Most Successful Mad TV Cast Members 4.6k VOTES List of the most successful Mad TV cast members, as ranked by fans and critics. From 1995-2009, the sketch comedy show Mad T...
#4 of 49 People who voted for Frank Caliendo... also upvote James Bond Franchise on Every James Bond Movie, Ranked Best to Worst also upvote Star Wars Franchise on The Best Epic Movies The Best Celebrity Impersonators Ever 14.7k VOTES The best celebrity impressionists ever include some legendary comics and impersonators like Rich Little, Will Jordan, and Wi...
American Stand-Up Comedians: The Best Comics In the USA 170.5k VIEWS American comedians are some of the top rated stand up comedians in the world. These are the greatest stand up comedians this...

Frank Caliendo is also found on...