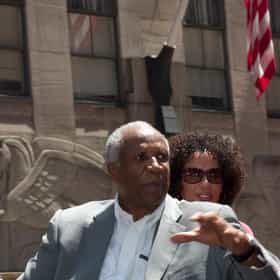 Frank Robinson (August 31, 1935 – February 7, 2019) was an American professional baseball outfielder and manager in Major League Baseball (MLB) who played for five teams, from 1956 to 1976. The only player to be named Most Valuable Player (MVP) of both the National League (NL) and the American League (AL), he was named the NL MVP after leading the Cincinnati Reds to the pennant in 1961 and was named the AL MVP in 1966 with the Baltimore Orioles after winning the Triple Crown; Robinson‘s 49 home runs (HR) that year tied for the most by any AL player between 1962 and 1989, and stood as a franchise record for 30 years. He helped lead the Orioles to the first two World Series titles in ... more on Wikipedia

Frank Robinson is ranked on...

Frank Robinson is also found on...