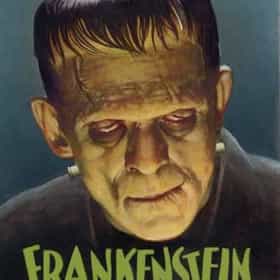 Frankenstein is a 1931 horror monster film from Universal Pictures directed by James Whale and adapted from the play by Peggy Webling, which in turn is based on the novel of the same name by Mary Shelley. The film stars Colin Clive, Mae Clarke, John Boles and Boris Karloff and features Dwight Frye and Edward van Sloan. The Webling play was adapted by John L. Balderston and the screenplay written by Francis Edward Faragoh and Garrett Fort with uncredited contributions from Robert Florey and John Russell. The make-up artist was Jack Pierce. A huge hit with both audiences and critics, the film was followed by multiple sequels and became one of the most iconic horror films in movie ... more on Wikipedia

Frankenstein is ranked on...