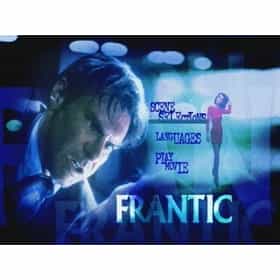 Frantic is a 1988 American-French mystery thriller film directed by Roman Polanski and starring Harrison Ford and Emmanuelle Seigner. The theme was written, arranged and performed by Simply Red. The French locations and Ennio Morricone's musical score create much of the film's atmosphere. Grace Jones' recording of "I've Seen That Face Before", a cover version of Ástor Piazzolla's Libertango, as well as "Chicago Song" of David Sanborn is heard at key moments in the film. ... more on Wikipedia

Frantic is ranked on...

Frantic is also found on...