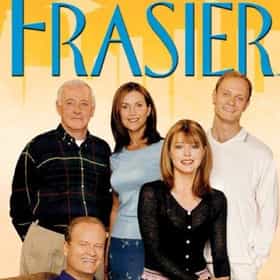 Frasier is an American sitcom that was broadcast on NBC for eleven seasons, premiering on September 16, 1993, and concluding on May 13, 2004. The program was created and produced by David Angell, Peter Casey, and David Lee in association with Grammnet and Paramount Network Television. A spin-off of Cheers, Frasier starred Kelsey Grammer, David Hyde Pierce, John Mahoney, Jane Leeves, Peri Gilpin, and Moose/Enzo. Critically acclaimed, it was one of the most successful spin-off series in television history. ... more on Wikipedia

Frasier Crane
The Best Frasier Episodes of All Time 19k votes List of the best Frasier episodes, as determined by voters like you. Comedy sitcom fans will also enjoy the best Cheers ep...
These Fan Theories From 'Frasier' Are Pretty Wild - But They Could Be True 616 votes NBC primetime shows have been a pillar of good TV for decades. In fact, NBC has made some of the greatest sitcoms in televis...
Dark Behind-The-Scenes Stories About 'Frasier' 273.7k views Fraiser was one of the most popular shows on television in the 1990s and early 2000s. During its run from 1993 to 2004, the ...
The Best Frasier Actors 402 votes The Frasier cast is among those who are likely to go down in history for creating a show that's always hysterical, no matter...
The Best Seasons of Frasier 1k votes List of the best seasons of Frasier, listed from best to worst with pictures of DVD covers when available. Hardcore fans of ...

Frasier is ranked on...

Frasier is also found on...