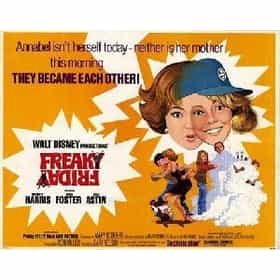 Freaky Friday is a 1976 American fantasy comedy film directed by Gary Nelson and starring Barbara Harris as Ellen Andrews, Jodie Foster as her daughter Annabel, and John Astin as her husband, Bill Andrews. The film is based on the novel of the same name by Mary Rodgers, in which mother and daughter switch their bodies and they get a taste of each other's lives. The cause of the switch is left unexplained in this film, but occurs one Friday the 13th, when Ellen and Annabel, in different places, say about each other at the same time "I wish I could switch places with her for just one day." Rodgers adds a waterskiing subplot to her screenplay. Neither Barbara Harris nor Jodie ... more on Wikipedia

Freaky Friday is ranked on...

Freaky Friday is also found on...