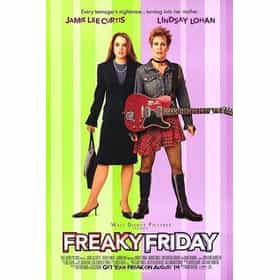 Freaky Friday is a 2003 comedy film based on the novel of the same name by Mary Rodgers. It stars Lindsay Lohan as Anna Coleman and Jamie Lee Curtis as her mother. In the film their souls are switched due to an enchanted Chinese fortune cookie. It also stars actors Mark Harmon and Chad Michael Murray with Julie Gonzalo. This is Disney's second remake of the original 1976 film, starring Barbara Harris and Jodie Foster. A 1995 television remake was produced by ABC, which became a subsidiary of Disney the following year. ... more on Wikipedia

Freaky Friday is ranked on...

Freaky Friday is also found on...