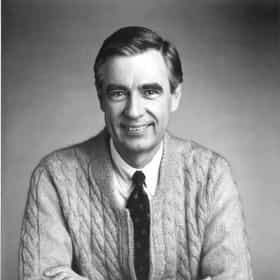 Fred McFeely Rogers (March 20, 1928 – February 27, 2003) was an American television personality, musician, puppeteer, writer, producer, and Presbyterian minister. He was known as the creator, composer, producer, head writer, showrunner, and host of the preschool television series Mister Rogers' Neighborhood (1968–2001). The program was marked by its slow pace and its host's quiet manner. He was born in Latrobe, Pennsylvania, and had a difficult childhood in which he was isolated and bullied. After earning a bachelor's degree in music from Rollins College in 1951, Rogers began working in television, initially at NBC in New York. He returned to Pittsburgh in 1953 to work for children's ... more on Wikipedia

Fred Rogers is ranked on...

#85 of 926 People who voted for Fred Rogers... People Age 30 to 49 are 2x more likely to vote for this Women are 2x more likely to vote for this People We Wish Were Still Alive 3.3M VOTES RIP to our world's greatest achievers, those who changed the way we live and the ways we thought. This list of people we wis...
#36 of 82 Celebrities You Think Are The Most Humble 56k VOTES Humble: to have or show a low estimate of one's own importance. Humility is a rare virtue, particularly in a socia...
#36 of 113 The Most Influential Contemporary Americans 141.6k VOTES A list of the Americans who have had the most central influence on, or importance to, the modern era. This would include Ame...
Famous People Named Fred 30k VIEWS List of famous people named Fred, along with photos. How many celebrities named Frederick can you think of? The famous Freds...
Famous Model Train Hobbyists 79.1k VIEWS All aboard! Several famous musicians, actors, and TV personalities are model railway enthusiasts. Some of these celebrities ...
Famous INFPs 627.4k VIEWS Many of the most popular musicians, authors, and artists are INFPs (Introverted Intuitive Feeling Perceiving). INFPs ar...
99 Celebrities Who Went to Ivy League Schools 380.7k VIEWS Celebrities who went to Ivy League schools are those smarty pants actors, musicians, and other famous people in the entert...
Celebrities Who Play Piano 96.5k VIEWS   Learning to play the piano can definitely be a challenge, but these celebrities have mastered the art. Celebrities ...
51 Celebrities Who Were In National Honor Society 53.8k VIEWS This list contains information about celebrities who were in the National Honor Society, loosely ranked by fame and populari...

Fred Rogers is also found on...