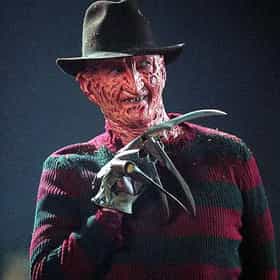 Fred "Freddy" Krueger is the main antagonist of the A Nightmare on Elm Street film series. He first appeared in Wes Craven's A Nightmare on Elm Street as a burnt serial killer who uses a glove armed with razors to kill his victims in their dreams, causing their deaths in the real world as well. In the dream world, he is a powerful force and almost completely invulnerable to damage. However, whenever Freddy is pulled into the real world, he has normal human vulnerabilities. Krueger was created by Wes Craven, and had been consistently portrayed by Robert Englund since his first appearance. In the 2010 franchise reboot, he was portrayed by Jackie Earle Haley. In 2011, Freddy ... more on Wikipedia

Freddy Krueger is ranked on...

Freddy Krueger is also found on...