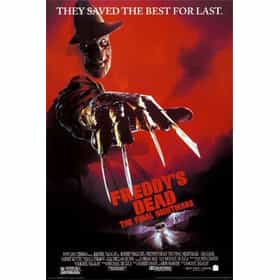 This film is a 1991 American comedy-horror slasher film and the sixth film in the Nightmare on Elm Street series. As the title suggests, it was intended to be the last film in the series and it is the sixth film in the series; however, the success of the film prevented the series from ending. It is the sequel to A Nightmare on Elm Street 5: The Dream Child and is followed by Wes Craven's New Nightmare. This was New Line Cinema's first film released in 3-D. Robert Englund reprises his role as Freddy Krueger; Lisa Zane, Yaphet Kotto, Breckin Meyer, Shon Greenblatt, Ricky Dean Logan, Lezlie Deane and Tobe Sexton also star. ... more on Wikipedia

Freddy's Dead: The Final Nightmare is ranked on...

Freddy's Dead: The Final Nightmare is also found on...