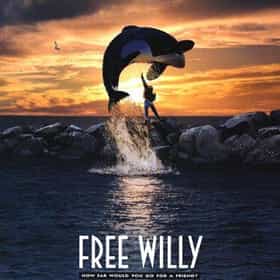 Free Willy is a 1993 American family drama film that was released by Warner Bros. under its Family Entertainment label. The film stars Jason James Richter as a delinquent boy who becomes attached to a captive orca, the film's eponymous "Willy." Followed by three sequels Free Willy 2: The Adventure Home, Free Willy 3: The Rescue, and Free Willy: Escape from Pirate's Cove, and a short-lived animated television series, Free Willy was a financial success, eventually making a star out of its protagonist Keiko. The film's famous climax has been spoofed several times in popular culture. Michael Jackson produced and performed "Will You Be There", the theme for the film, ... more on Wikipedia

Free Willy is ranked on...

Free Willy is also found on...