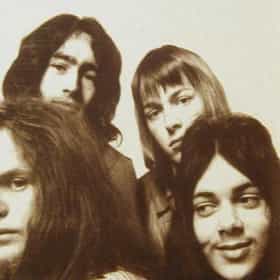 Free were an English rock band formed in London in 1968, best known for their 1970 signature song "All Right Now". They disbanded in 1973 and lead singer Paul Rodgers went on to become the frontman of the band Bad Company, which also featured his Free bandmate Simon Kirke on drums. Lead guitarist Paul Kossoff formed Back Street Crawler in 1975, but died from a pulmonary embolism at the age of 25 in 1976. Bassist Andy Fraser formed Sharks.Free became renowned for their live shows and non-stop touring. However, their studio albums did not sell very well until their third, Fire and Water, featured the massive hit "All Right Now". The song helped secure them a place at ... more on Wikipedia

Free is ranked on...

#179 of 466 The Best Current Pop Groups/Singers 461k VOTES A list of the best current pop groups and singers who are making some of the best pop songs of 2019. The battle between...
#374 of 2,186 The Greatest Musical Artists of All Time 13.4M VOTES When VH1 polled fellow artists to name the greatest artists of all time, it seemed like a good idea---but in reality, the li...
#239 of 2,239 People who voted for Free... People over 50 are 2x more likely to vote for this also upvote James Bond Franchise on The Best Spy Movies The Best Rock Bands of All Time 3.2M VOTES There are thousands of rock bands that have existed throughout the decades ever since the dawn of rock and roll, but only th...
#3 of 171 The Best One-Hit Wonders of the 1970s 46.4k VOTES From rock and roll to pop, these are music's best one hit wonders from the 1970s, listed by performer. This is a list of pop...
#191 of 298 People who voted for Free... also upvote Die Hard Franchise on The Most Rewatchable Movies Musicians Who Belong in the Rock and Roll Hall of Fame 413.4k VOTES Update:  Nirvana, Peter Gabriel, KISS, Hall and Oates, Linda Ronstadt and Cat Stevens were inducted into the Rock ...
#105 of 354 The Greatest Classic Rock Bands 473.5k VOTES The greatest classic rock bands of all time embody the spirit of a generation of people who just wanted to rock. These top c...
#112 of 411 The Best British Rock Bands/Artists 277.4k VOTES Of all the important rock bands to grace the stage, British bands are considered by many to be the most important and most i...
#43 of 136 The Best Stoner Rock Bands 21.6k VOTES Stoner rock, which combines elements of heavy metal, psychedelic rock, blues rock and doom metal, is one of the more deliber...
#62 of 100 The Best Musical Artists From Massachusetts 1.1k VOTES Here are the best artists and bands from Massachusetts. This may come as a surprise to some of you, but the band Boston actu...
#56 of 360 The Best Progressive Metal Bands 36.5k VOTES The beauty of progressive metal is that it combines the genres of progressive rock and heavy metal to crate a genre that is ...
#34 of 99 The Best Melodic Rock Bands 10.1k VOTES Melodic rock artists list, with photos, ranked best to worst by votes. List of good melodic rock bands includes a filter so ...

Free is also found on...